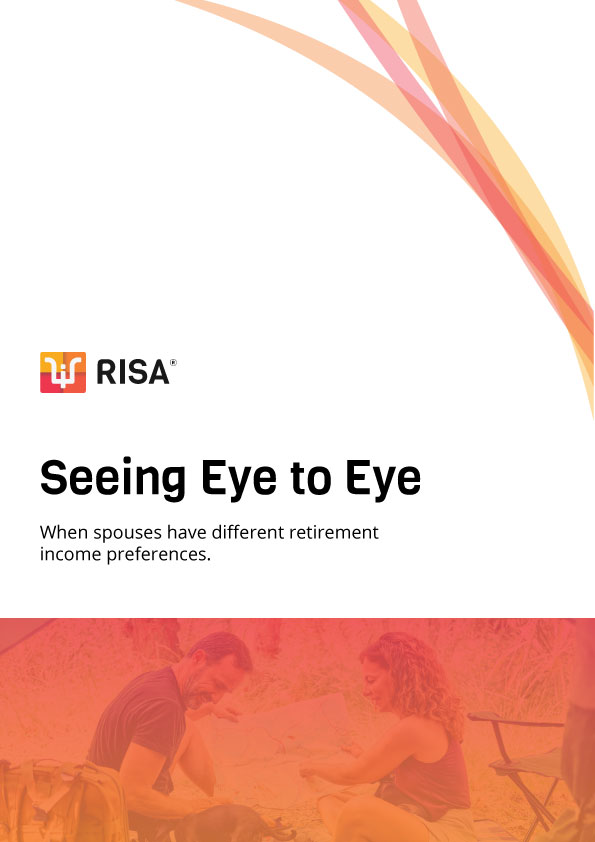 Finding and implementing the right strategy for sourcing your retirement income can be a daunting task. A myriad approaches and options are available, and truthfully, many of them will probably work all right, more or less, at least for a time. But which approach is best for you—is most precisely suited to your strengths and weaknesses, your concerns and biases and priorities, your preferences and lifestyle—may be something else altogether. A strategy that's custom tailored not just to your requirements but to your personality is one you'll feel good about and, consequently, one you're most likely to implement with relative ease. It's the one you'll be able to stick with because it feels right—and therefore, the one that's most likely to succeed.

Our Retirement Income Style Awareness (RISA®) tool can help you identify that solution. From your unique profile, it will show you a range of appropriate options so you can choose what's best for you. That's because it's designed to capture the multifaceted aspects of a retirement income plan beyond a traditional accumulation-focused portfolio guided by a minimal risk-tolerance questionnaire.

Unlike any retirement planning tool that's come before, the RISA® was specifically built to measure a variety of choices about how you're most comfortable sourcing your retirement income. It translates your choices into a snapshot of appropriate, viable strategies that fit your style. It's an empowerment tool to help you find what's best for you. No single approach or product will work for everyone, of course. So our methodology effectively identifies your particular preferences and matches them to specific retirement income strategies and recommendations for you to choose. In this way, the RISA® solves the problem of scattershot retirement planning.

Through a series of user-friendly questions, it zeroes in on your unique profile to generate custom-tailored retirement income solutions. The secret behind the system is we've broken down retirement income styles into specific dimensions that gauge your preferences in relation to financial decision-making.

The two primary factors our questions assess are Probability versus Safety First and Optionality versus Commitment. Probability versus Safety First details how you would like to source your retirement income—from sources dependent on potential market growth or from contractual obligations. Optionality versus Commitment delves into the degree of flexibility sought. Maybe you like to keep your options open, or your prefer to commit to one solution and be done. There are no right or wrong answers here. It's all a matter of preference.

We then examine four secondary factors to sharpen and refine your profile: Accumulation versus Distribution, Technical Liquidity versus True Liquidity, Front-Loading versus Back-Loading, and Time-Based versus Perpetuity planning. These dig deeper into precisely which type of approach for sourcing retirement income feels best and most fitting for you.

From there, with this foundation of distinct factors to identify your preferences, we define your RISA® Matrix, which is made up of appropriate and practical retirement income approaches. More specifically, the Matrix lays out four quadrants to delineate your individualized retirement income profile.

Next, we identify the four main strategies that match up with the four RISA® Matrix quadrants.

To illustrate this process, here is an example of how you can identify a retirement income approach that best fits unique personalities and preferences. Your story may be completely different. This is just sample a case study to demonstrate the effectiveness of our system. No one situation or solution is better than the others. You may or may not identify with this case, but that's okay. What's best for you depends entirely on who you are.

That, after all, is the point. The retirement income sourcing strategy that's best for you is one that's matched to your specific and unique style and preferences.

Seeing Eye to Eye: When a spouses have different retirement income preferences.

Dylan and Sara embodied the "opposites attract" characteristic of many lasting marriages. Where Sara was the detailed-oriented pragmatist, who maintained the family’s budget and kept things in order, Dylan was the quixotic thinker chasing the big prize. Luckily, Dylan had more wins than losses, and Sara never let those losses exceed their capacity to sustain them. This dynamic was further reflected in the counsel they provided their children as they readied themselves for the workforce. While Dylan implored their children to chase their dreams, Sara tempered that a bit by making sure they had a fall back.

Together they struck a nice balance, and they knew it. Dylan took on risky professional endeavors; Sara’s steady income balanced out those risks. In addition, when realized they treated Dylan’s potential for outsized income opportunities as a windfall and reinvested it for retirement.  They capitalized on a broadly diversified investment portfolio that they rarely tweaked but frequently contributed to. At any point in time, the portfolio ranged from 65% to 75% in equities and 35% to 25% in bonds, respectively. They did not fret at all about their allocation since it was directionally within their tolerances.

As retirement grew closer, however, they began to sense that what had gotten them this far might not serve them well in retirement. It was time to transition their portfolio for retirement income, especially since Dylan and Sara would not be earning consistent income in the first five years of retirement, and probably none afterward. How would they reconcile their differing attitudes about generating income in this new scenario? Dylan was still the eternal optimist, and Sara wanted to ensure that they maintained the lifestyle they had grown accustomed to. Their investment attitudes toward retirement could almost be summed up as Dylan was as hopeful as a stock and Sara was as cautious and steady as a bond.

But something else was disturbing Dylan. His parents had died in their early 70s, and he'd had a brief but serious cancer scare in his 50s. He knew Sara might outlive him. He wanted to enjoy his retirement years with her while they could. Additionally, though he knew Sara could handle her own finances after he was gone, and she could always count on their adult children for guidance, the kids were more risk-tolerant than their mom and might not fully empathize with her outlook. Sara was not a risk-taker; her primary concern was maintaining lifetime cash flow throughout her retirement years. The kids might not get that.

Through the RISA® questions, we were able to pull out many of the preferences that Dylan and Sara exhibited during their accumulation years as they readied for retirement. Their RISA® profiles is:

On the other hand, Sara’s two primary factors were:

Their RISA® results indicate that Dylan prefers to draw retirement income from a diversified investment portfolio and fully expects that portfolio's growth to support a sustainable spending rate. He is also willing to make spending cuts later in retirement if favorable market returns are elusive early in retirement. Sara's results indicate a preference for drawing income from contractual obligations and a willingness to commit to a lasting solution as long as it resolves their lifetime income needs.

While it might seem easy to acquiesce and go with the more conservative strategy of the two, identifying differences between Dylan and Sara can also help them develop and implement a retirement income plan that works for both.

Dylan's secondary RISA® factors exhibit a desire for portfolio growth; Sara’s focus is on establishing a retirement income floor at the potential expense of maximum investment growth. Dylan is open to decreasing spending as he ages, but Sara wants to maintain a steady and predictable cash flow by potentially backloading their retirement expenses to make sure they have enough to last throughout their lives. To manage unexpected expenses, Dylan is willing to drawdown from their portfolio while Sara prefers to have a "rainy day" set-aside account earmarked for such contingencies.

The discrepancies may seem insurmountable, but it is possible to identify complementary strategies for sourcing retirement income that could satisfy both spouses. By identifying the specific differences between them, they can successfully implement a retirement income strategy that works for both sets of preferences.

For instance, Dylan and Sara can merge aspects of both a total return and a protected income approach to satisfy their concerns and retirement income styles. They can identify the essential income needs that Sara wants to fund throughout their retirement and then allocate an appropriate sum to a personal pension to satisfy these needs; this includes immediate or deferred income annuities and other types of annuities that blend a degree of market participation with guaranteed retirement income. This provides the reliable income floor she needs, to satisfy essential spending requirements. At the same time, Dylan can also find comfort in knowing that Sara can depend on consistent retirement income should he pass before her. With the remaining assets, Dylan can invest according to his preferences because their essential income needs are accounted for. In aggregate, the reliable income from contractual sources functions as the fixed income allocation within their combined investment portfolio. As such, Dylan can assign the more discretionary expenses to the investment portfolio. With the RISA®, they were able to identify what characteristics from each approach they would emphasis to satisfy both of their preferences.

While this case study may not match your situation, the RISA® is specifically designed to capture your unique set of biases, leanings, and preferences. It's a tested and effective custom-tailored tool for an age-old problem: how to structure a retirement income sourcing strategy that feels right and will go the distance.

Financial experts are full of ideas and approaches to retirement income planning, many of which are valid. But they are not based on this kind of detailed assessment of your particular personality and financial style. Our RISA® system solves the problem of cookie-cutter methods by weighing specific measures of how you want to source your retirement income. As in the case described above, the RISA® will generate an appropriate matrix that matches suitable and available retirement income strategies to your particular quirks and desires.

Once you're armed with this information, you will become a more informed consumer. You will be empowered to choose the right retirement income strategy for you—one that fits as comfortably as an old pair of jeans, one that will feel right for the length of your retirement. That's important for not just your retirement satisfaction but your ability to stick with the plan. You can't be expected to implement a strategy that just doesn't feel right. That's a recipe for disaster. But with the RISA® assessment, you can feel certain of finding the ideal approach for your situation and personality. That's one you'll be able to implement with confidence and ease. As such, it's the retirement income sourcing plan that's most likely to succeed for the long haul.

So take our RISA® questionnaire today. It's easy, and you might even find it fun. But the most important reason to do it now, without delay, is that it could change the course of your retirement. It could improve your odds of successfully maintaining a retirement income strategy in a way you'll feel good about and enable you to implement it with success.